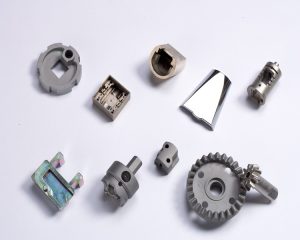 While iron, low-alloy steels and stainless steel are the most commonly used metals to form MIM parts, many alloys also make use of aluminum, titanium, cobalt, chromium, copper, magnesium, nickel, carbides as well as precious metals.

The process, which was developed and commercialized in the 1970s and 1980s, is similar to plastic injection molding and high-pressure die-casting.

It is now a fast growing segment of the metals market used to produce a wide range of parts used in industrial, commercial, medical, aerospace and automotive applications.

The largest advantages to using Metal Injection Molding (MIM) are seen in relatively small, complex parts that would otherwise require costly machine finishing or assembly. As such, the development of MIM technology is credited with allowing complex metal parts to be cost effectively produced in high volumes.

In 2012, the market for Metal Injection Molding (MIM) was estimated by BCC Research to be about US$ 1.5 billion. MIM Market size in China is predicted to be more than US$ 1.0 billion in 2018

Step 1. Feedstock Mixing and Granulating
The first step in manufacturing MIM parts is to create a feedstock. This involves combining a metal powder – or an alloy of powders – that possess specific required characteristics with a thermoplastic polymer and paraffin that, together, act as a binding material.

Most metal powders used in Metal Injection Molding (MIM) have an average particle size of fewer than 20 microns.

The mixing process is conducted at high temperatures to ensure a uniform coating of the powder. This is critical to ensure flow characteristics are suitable for the injection molding process.

The binding material comprises about 40 percent of the total mixture by volume.

After cooling, the resulting product is a granulated mixture of metal powder and binder that can be fed into the injection molding machine.

Step 2. Molding
The feedstock pellets are then fed into the barrel of a molding machine where they are heated to create a paste-like consistency.

The paste can then be forced through gates into a pre-designed cavity mold.

Once this process is complete, the mold is allowed to cool before the fully-formed part is removed.

At this stage, the still fragile and porous part is referred to as a “green”.

Design features, such as holes or undercuts, that could not be included during the molding process can now be added by machining.

Step 3. Binder Removal
The green part still contains the polymer binding material included in the feedstock, which makes it about 20 percent larger than the final product design.

Removal of the primary binder can be done chemically (catalytic debinding) or thermally. The method used is dependent upon the physical and chemical characteristics of the material being used.

The debinding process will leave some polymer content within the MIM part, but only enough to hold the size and shape of the piece intact.

Once the binding material has been removed, the part is referred to as “brown”.

Step 4. Sintering
Set on a ceramic setter, the brown part is then put into a batch or continuous furnace where the temperature and atmosphere can be tightly controlled.

It is heated to roughly 85 percent of the material’s melting temperature, which burns off the remaining secondary polymer binding material.

At high temperatures, the metal particles also begin to fuse, eliminating weaknesses and faults in the part. This results in the part physically shrinking to form a dense, single solid part that will meet the size requirements of the original design.

If needed, post-sintering processing, including plating, passivating, annealing, carburizing, nitriding or precipitation hardening can all be done to meet stricter tolerances and enhance properties.